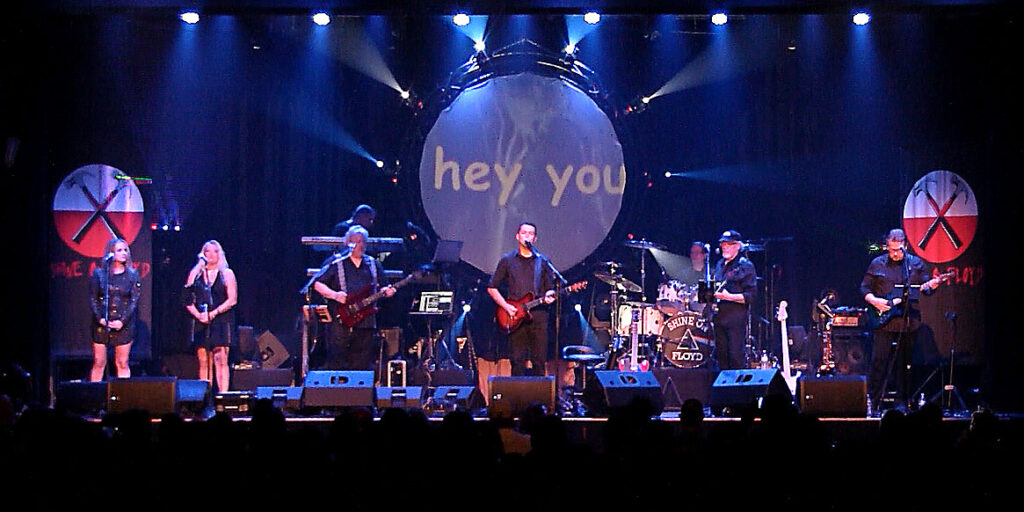 Shine On Floyd puts on a complete Pink Floyd experience playing most iconic classic Pink Floyd songs with an emphasis on songs from Dark Side of the Moon, Wish You Were Here, Animals, and The Wall.

The band was formed in January of 2019 by Scott Fresener (bass guitar) who has played on and off in the Phoenix area most of his adult life. Scott is the “mature” member of the group having played originally in the 60’s and having one of the hot local bands that opened for many national touring acts.

Bryan Laurienti is the bands lead singer and lead guitar and steel guitar player is. He is very detail minded which helps the band play all the subtle things going on in a Floyd song. Bryan is one of the younger members of the group who has a passion for all Pink Floyd songs and he can play lead and sing them all with great precision. He makes it look effortless.

Mike Jackson is the second lead guitar. Mike has played guitar all of his adult life and is a master guitar player and singer. He is originally from Canton Ohio and has played in a number of popular cover bands in that area including bands that played a few Pink Floyd songs. Mike brings his attention to the subtleties in Pink Floyd songs and he “plays a mean guitar.” Mike also brings an audio/sound background and is responsible for automating the sound effects and sound system.

Andrew Smith is the keyboard player. Andrew is very musical and was a music teacher. He has a great grasp of theory and works hard to get all the Richard Wright keyboard parts correct and helps the band with overall musicianship.

Jeff Bowen is the bands drummer. Jeff started playing drums when he was twelve (touring with his dad). He is a well seasoned drummer who gets in the pocket and keeps things nice and tight! Jeff sits back in his little “office/drum kit” and goes unnoticed until you listen to the band and realize it is the drummer driving things.

Romn Paras began playing saxophone at age 10 and has a music degree from Kent State University. He has played everything from classical jazz and funk to rock ‘n roll. Every respectable Pink Floyd tribute band needs a sax player for those iconic solos and Romn has found a home with Shine On Floyd.

A serious tribute band is not complete without backup singers. Pink Floyd songs are like a symphony and each part is critical and backup singers are a very key element to the overall sound. The band is very fortunate to have three outstanding backup singers who also help out with some lead vocals.

Jewell Hill was offered two record deals from Sony Records and has 3 albums to her credit. Jewell brings a wealth of intensity, joy and passion to her vocals. She is very dynamic and versatile – contributing to the heavenly choir backing vocals that grace Pink Floyd’s songs and bringing you goosebumps on songs like “Great Gig in the Sky”.

Amy Schugar brings her great voice and musical talents to the band. She was originally part of the metal scene in Los Angeles with her band “Maiden America” and she has toured extensively. She has a number of equipment manufacturer endorsement deals and has been written about in music trade magazine and online.

The fact that all of the band reads music and knows theory really helps them duplicate the Pink Floyd sound on stage. Plus, everyone in the band can handle background vocals and harmonies to help supplement the talented backup singers.

Of course a Pink Floyd show would not be complete without background videos, smoke, lasers, a light show, sound effects and more and of course Shine On Floyd has all of that. The band is very self-contained and owns their own large and small moving lights, lasers, large truss system, large video screen, projector, full sound system with sub woofers and more.

Shine On Floyd is a work of love to honor the creativity of Pink Floyd songs and they strive to put on a show where you can close your eyes and think you are hearing Roger Waters, David Gilmour, Richard Wright and Nick Mason on stage.